We asked you to comment on some key transport principles for the area, which would be to promote walking, cycling and public transport, make the area safe and permeable.

You told us you generally supported these principles, and that a comprehensive approach was needed to transport to make connections both within the site and to the surrounding area. Road access, public transport, cycling and walking were raised in individual comments.

7.1 Since we consulted in 2014 we have gathered new evidence of transport issues facing the area. The Greater Cambridge Partnership completed an Ely to Cambridge Transport Study in January 2018. The study considered the transport needs of the Ely to Cambridge corridor as a whole, including the needs of the major developments on the corridor such as the new town north of Waterbeach, and at North East Cambridge.

7.2 Currently 76% of work trips to the North East Cambridge area are made by car. This is significantly higher than many other areas in and around Cambridge, such as the Cambridge Biomedical Campus or CB1. The opening of the railway station, public transport, and cycling and walking improvements means there is a real opportunity to improve this situation.

7.3 By finding ways to make this area more accessible and attractive to travel to by other means, there is potential to unlock the significant development potential of the area, and make a major contribution to delivering the homes and jobs that the Greater Cambridge area needs in a sustainable manner.

7.4 New infrastructure will be needed to enable people to get to the area by means other than the car, and a mix of uses provided within the site so that people can access a range of services and facilities so reducing their need to travel. The AAP will also need to consider how to move within North East Cambridge, between the station and the science park for example. The potential for new technologies, such as autonomous vehicles, should be explored.

7.5 There are a range of infrastructure schemes which have potential to support development in the North East Cambridge area, many of which are being undertaken by other bodies such as Highways England, Greater Cambridge Partnership or the Cambridgeshire & Peterborough Combined Authority. 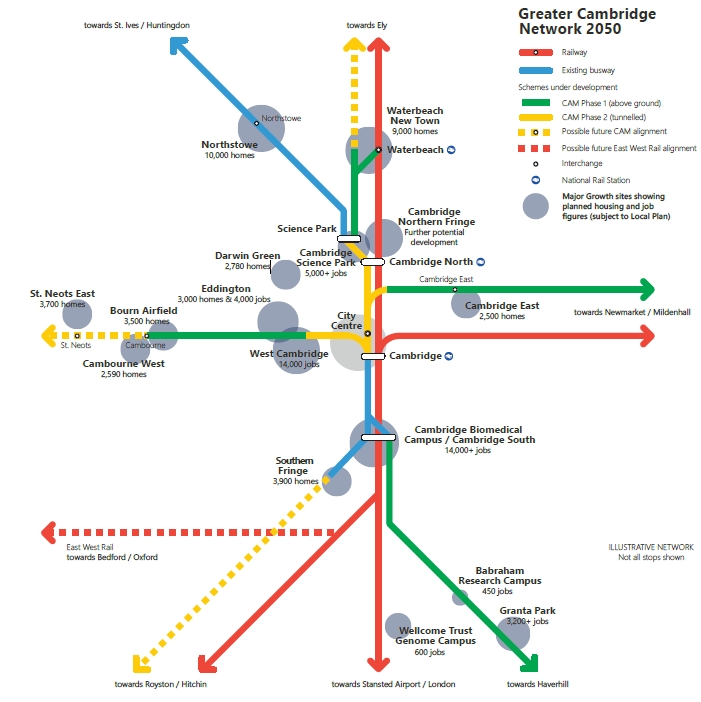 7.6 The Cambridge North railway station opened in 2017. Used by 320,000 people during its first year, the station is an important transport asset that significantly improves the transport accessibility of this area. A relocated Waterbeach railway station serving both the existing village and the Waterbeach new town now has planning permission. Other rail improvements are being planned in the wider area, including East West Rail, which will link Cambridge to Oxford, and may also improve links to Norwich and Ipswich. A new station south of Cambridge near Addenbrooke's to serve the Cambridge Biomedical Campus is also being explored.

7.7 The AAP will need to consider how to make the best use of the station, and we will be working with our partners to explore opportunities to enhance services to accommodate growth needs.

7.8 The Cambridge North station is already served by a bus only link to the Guided Busway. There are also busway stops serving the Science Park. We will still need to explore how to improve public transport access to the area, and how routes within the North East Cambridge can be improved.

7.9 There is potential for development in North East Cambridge to be supported by a range of improvements currently planned in the Cambridge area, including:

7.11 Through the AAP we will need to consider how these schemes can support development in North East Cambridge, and what other public transport measures are required.

We asked you what was needed to improve pedestrian and cycling links in the area.

You gave us a wide range of ideas, supporting connections in all directions, including across the railway, and to the north towards the Country Park and Waterbeach New Town. The quality of provision was also highlighted, with separation from motor traffic sought.

7.12 Comprehensive high quality pedestrian and cycle networks should permeate the area and link to the surrounding area. There are a range of connectivity issues within the North East Cambridge area that will need to be addressed.

7.13 NEC is well placed to link into the cycle network that crosses the city, as well as routes that serve destinations beyond the city, such as towards Northstowe. Improvements are already planned which will improve access to the area further:

7.14 Movement networks within the area will need to be designed around people rather than cars, and the development should take advantage of the opportunities provided by Cambridge North Station and the busway to take people to and from the area.

(40) Question 25: As set out in this chapter there are a range of public transport, cycling and walking schemes planned which will improve access to the North East Cambridge area. What other measures should be explored to improve access to this area?

We asked you whether we should set a low target for car usage for travelling to and from, and within the site.

You told us that whilst many thought we should set challenging targets, we needed to do more to understand whether it was achievable, and what infrastructure would be required to support it. A range of ideas where put forward regarding specific transport measures that should be included in the site.

7.15 While the North East Cambridge area is well located with respect to the strategic and local highway networks, this advantage is constrained at peak times by significant levels of congestion and delay on these routes.

7.16 Improvements to the A10, including junction improvements and dualling, are being explored by the Cambridgeshire & Peterborough Combined Authority. Whilst this will assist delivery of development, analysis suggests that the largest movements associated with the North East Cambridge would be from the east and west on the A14 and from the south on the M11. Even with the improvements currently taking place, growth at NEC has potential to displace traffic onto less appropriate routes if not planned appropriately.

7.17 The main road access into the area is from Milton Road. We are exploring what we can make to rationalise or improve the current access arrangements. However, there are limited opportunities to make major access improvements to this already congested route and, even if significant improvements could be made, they could potentially further encourage more car trips into this already congested area. The Cambridge to Ely study indicates that a new road junction to serve the area directly from the A14 is not a practical or viable option. Even if it were, this too could potentially also encourage further car-dependent development and increase congestion levels.

7.18 The area is well placed to take advantage of existing and planned transport solutions which do not rely on the car. The challenge for achieving development at North East Cambridge is to deliver growth without also delivering a significant overall increase in car use to the sites and resulting traffic congestion.

7.19 From a technical perspective, the Ely to Cambridge Study proposed that a highway 'trip budget' approach is used. This approach would require finding ways to accommodate development with a constrained number of car trips by supporting means other than the car, rather than planning for unconstrained car trip growth.

(26) Question 26: Do you agree that the AAP should be seeking a very low share of journeys to be made by car compared to other more sustainable means like walking, cycling and public transport to and from, and within the area?

(19) Question 27: Do you have any comments on the highway 'trip budget' approach, and how we can reduce the need for people to travel to and within the area by car?

Responses were varied. There was benefit in restricting car parking for discouraging car use, but concern about the impact on the area if car parking was not sufficient. We also needed to consider the impact on businesses. Most respondents considered that high levels of cycle parking were needed in this area.

7.20 Existing employment sites in NEC currently have high levels of car parking provision, and this provision is in many cases significantly underutilised. Further, these employment sites generally have higher levels of car use than other large employment areas in the city. While good progress has been made in reducing this in recent years, the proportion of workers at these sites who drive to work is almost double that of the Cambridge Biomedical Campus, and five times that planned at CB1 (56% at North East Cambridge, 31% car driver mode share for staff at the Biomedical Campus, 11% car driver mode share agreed through transport assessments for CB1)[5].

7.21 One of the key recommendations from the Ely to Cambridge Transport Study is that a policy of stringent parking constraints should be applied in the area. This would need to apply to existing sites in the area as well as new developments, and be accompanied by measures to manage on-street parking. We will be carrying out more work on this to inform the draft plan.

7.22 Cycle provision will need to support the level of mode shift required and therefore must be designed to accommodate high levels of cycling provision, including the implications of this on cycle storage and parking. This should consider innovative solutions that increase capacity without resulting in masses of unsightly cycle racks.

(20) Question 28: Do you agree that car parking associated with new developments should be low, and we should take the opportunity to reduce car parking in existing developments (alongside the other measures to improve access by means other than the car)?

(20) Question 29: Do you agree that we should require high levels of cycle parking from new developments?

(15) Question 30: Should we look at innovative solutions to high volume cycle storage both within private development as well as in public areas?

(17) Question 31: What additional factors should we also be considering to encourage cycling use (e.g. requiring new office buildings to include secure cycle parking, shower facilities and lockers)?

7.23 NEC will be developed over a long period, and the transport technologies available in that time will also evolve. It will be important that NEC is capable of responding to those changes.

(13) Question 32: How do we design and plan for a place that makes the best use of current technologies and is also future proofed to respond to changing technologies over time?

7.24 In the Place Making Chapter of this Report, we considered what kind of place this area should be, and what it should be used for. Mixed use development, with a diverse range of residential, employment, education, retail and local amenities would provide the opportunity for those living and working in the area to access many services without using a car.

7.25 Movement networks in the area will need to be designed around people rather than cars. Comprehensive high quality pedestrian and cycle networks should permeate the area and link to the surrounding area.

7.26 Effective 'last mile' links from the station and from the busway stops to destinations like the Science Park will be key to the area's success. This potentially could use innovative solutions like autonomous vehicles, demand responsive transport, or cycle hire schemes.

Issue: Linking the Station to the Science Park

(15) Question 33: what sort of innovative measures could be used to improve links between the Cambridge North Station and destinations like the Science Park?