4.1 This section provides a summary of what the NEC area is like now, and issues that need to be considered when preparing the development plan for the area. The area is subject to a number of constraints, but the area's physical size and strategic location within the City also presents a unique development opportunity for Cambridge.

4.2 The physical characteristics of the NEC area include:

4.3 Land uses within this large area are diverse, but can be summarised broadly into a number of areas as set out in Figure 3.1. 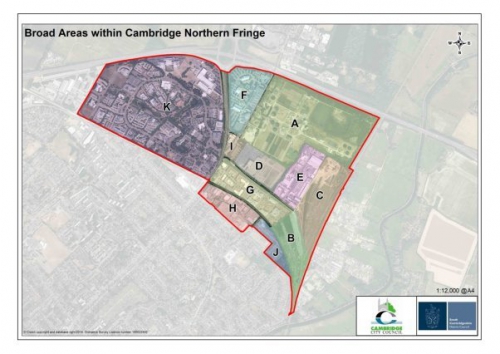 4.4 NEC is situated between the A14 to the north, the Cambridge to King's Lynn railway line to the east, and the Chesterton residential area to the south. It is bisected by Milton Road, which then continues north as the A10 towards Ely and Kings Lynn.

4.5 It is approximately 3km from Cambridge City Centre. To the north of the A14 lies the village of Milton, 0.8km from NEC. The planned new town north of Waterbeach lies around 5.5km to the north.

4.6 Milton Country Park, which provides access to woodlands and lakes, as well as a visitor centre and children's play areas, is located across the A14 to the north. The River Cam corridor, to the east of NEC, includes walking and cycling opportunities.

4.7 The areas adjoining the NEC area are largely residential. To the east of the railway line, there are a number of Gypsy and Traveller sites located along Fen Road.

4.8 Of the three wards adjoining the site, two fall within the 20 most deprived wards in Cambridgeshire in terms of indices of multiple deprivation, namely the King's Hedges and East Chesterton wards. 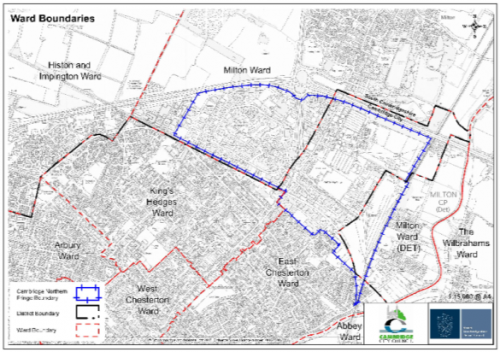 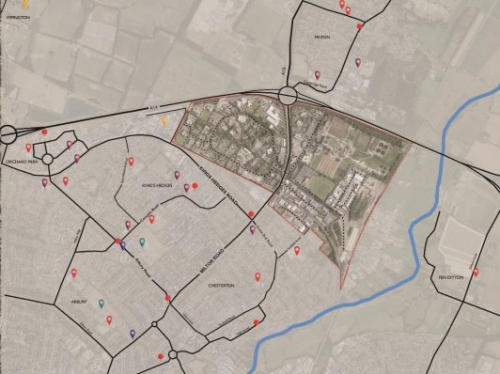 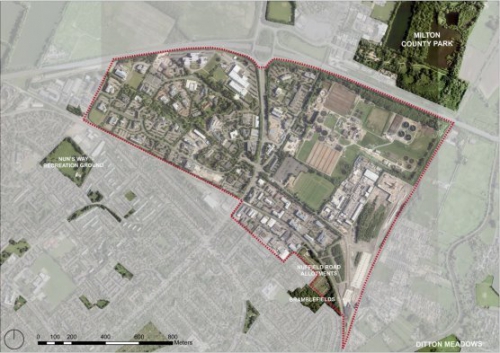 4.10 There are a range of routes available from the area towards destinations in Cambridge. The area is also connected to the north via the Jane Coston Bridge and the Guided Busway. The quality of existing routes is mixed. There are severance issues in a range of places, which make moving within and beyond the NEC area more challenging, such as difficulties in crossing Milton Road, the boundaries of business parks and their lack of permeability, the A14 and the railway line.

4.11 The Cambridge North Station opened in May 2017, providing services to London, Ely, King's Lynn and Norwich. The Cambridgeshire Guided Busway provides access to the Science Park and links to the Cambridge North station. There are also other existing local bus connections that focus on providing north-south connections on Milton Road. North of the A14, west of the A10 and South of Butt Lane in Milton, a bus-based park and ride site is provided.

4.12 The NEC area has close connections to the A14 trunk road, and the A10, also part of the Primary Route Network. Highway access to the site is mainly served via local junctions off Milton Road. Nuffield Road Industrial Estate is served from Green End Road. Parts of the highway network frequently operate at or near capacity, particularly in the morning and evening peaks with queuing and delays prevalent on Milton Road, as well as the A10 and A14, particularly at the Milton Interchange to the north of the site. 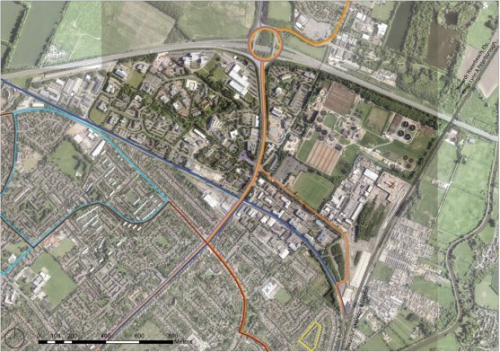 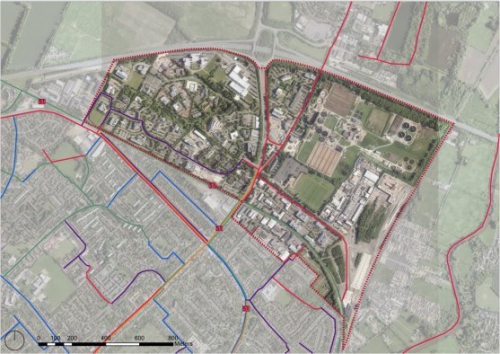 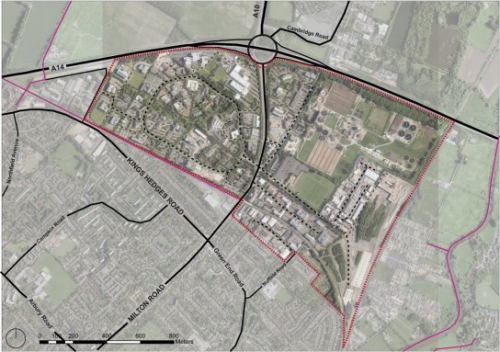 Issue: The physical characteristics of the North East Cambridge area

(16) Question 3: In this chapter have we correctly identified the physical characteristics of the North East Cambridge area and its surroundings?

4.13 The area contains three notable areas of ecological value that will need to be protected and enhanced: Bramblefields Local Nature Reserve (LNR) (shown as area J on Figure 3.1); the protected hedgerow on the east side of Cowley Road opposite St. John's Innovation Centre, which is a City Wildlife Site; and the First Public Drain, which is a Wildlife Corridor. The Cambridge Science Park also has a number of ponds. 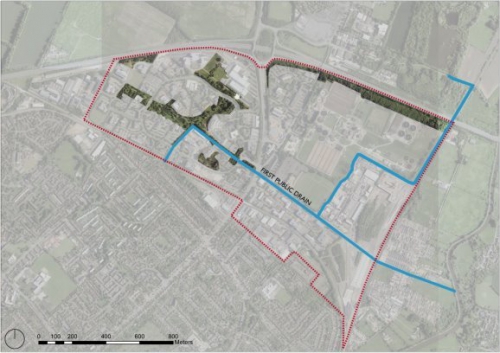 4.14 There is a need to maintain and, where appropriate, enhance the overall character and qualities of the townscape and skyline of Cambridge, as the city continues to develop into the future. Views into and out of the NEC area, and the wider landscape context, will be important considerations.

4.15 An Area Flood Risk Assessment was completed for the 2014 Issues & Options document that covered the area to the east of Milton Road. This showed that the risk of fluvial (river) flooding was low but identified a risk of surface water (pluvial) flooding, although this is confined to small areas. Levels of groundwater in the area are known to be high, although there are no recorded instances of groundwater flooding within NEC. Development proposals will need to take this level of risk into consideration, providing mitigation through carefully designed sustainable drainage systems, and other design measures.

4.16 The Water Recycling Centre treats used water from customers in Cambridge and surrounding villages and is a source of odour generation that acts as a significant constraint to developing the surrounding area whilst it remains on site and in operation. An independent Odour Impact Assessment Study, commissioned by the Councils, has been undertaken to model and map the levels of odour exposure emanating from the Water Recycling Centre. If this facility is relocated off the NEC site, this odour constraint will be removed.

4.17 Areas adjacent to noise sources including the A14 trunk road, Milton Road, Cambridge Guide Busway, the railway line, Cambridge North Station and railway sidings may be unsuitable for some forms of development or will require careful acoustic design and mitigation due to adverse noise impact issues.

4.18 As the area is immediately adjacent to the A14, local air quality impacts will be an important consideration. Sources of air pollutants can have an impact on public health, and for transport, sources such as trunk roads particulate matter (PM10 and PM2.5) and nitrogen dioxide (NO2) are most relevant. There is a current Air Quality Management Area designated along the A14 corridor from the A14 Milton Junction to Bar Hill.

4.19 Careful consideration will be required of the layout and design of new development across the NEC area, such as new homes, workplaces or other land uses where these may be affected by poor air quality. It will also be important to ensure that new development does not add unacceptable risks to local air quality.

4.20 There has been a range of historical uses across the NEC area, including the Water Recycling Centre and various industrial uses that may have resulted in land contamination. Where further investigations identify contamination, depending on the nature of contaminants found, this will require remediation and may influence the suitability of the land for specific land uses, including the layout and design of any future development proposals.

4.21 The area east of Milton Road is the subject of several adopted County minerals and waste management planning policies. These are shown on the Planning Policy Designations Map at Figure 2.2. The designations relate to the potential for new waste management uses in an area of search; and the protection of existing facilities, which seek to ensure that the continued operation is not prejudiced by future development. This includes the aggregates railway siding and railhead that have been relocated within the site and contributes to Heavy Commercial Vehicle movement on Cowley Road.

4.22 Consideration will need to be given to dust and particulate matter from the minerals and waste operations; and vibration close to the railway line and sidings. Consultation will be required with Cambridge airport regarding the safeguarding consultation zone on building heights. Measures to reduce light pollution from new development will also be required. Existing sources of lighting may also have an impact on any proposed residential development and will need assessment on a case-by-case basis. There is a 132Kv overhead power line running east to west across the area. Options to realign and bury this line should be explored so that it would not constrain development.

(31) Question 4: Have we identified all relevant constraints present on, or affecting, the North East Cambridge area?