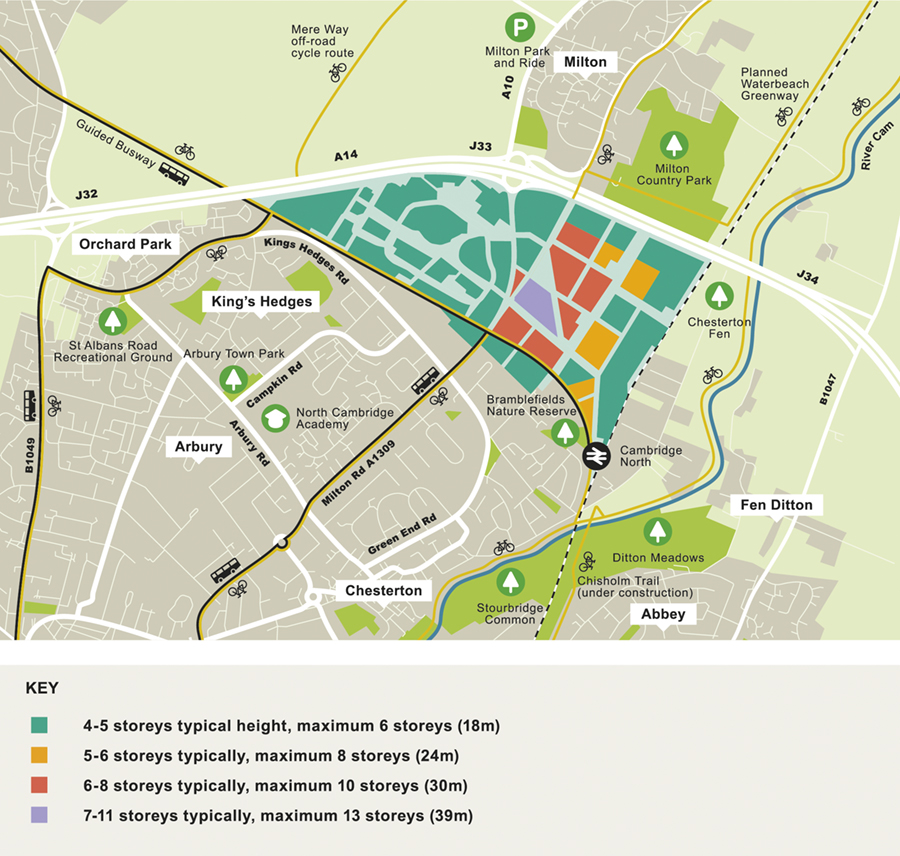 North East Cambridge should be a place which enables people to live, work and relax within walking distance of everything they need. Building to a higher density means land can be used more efficiently and it makes community services, shops and other facilities more viable. The Councils have undertaken evidence which shows that it is possible to build taller in some parts of the area without a negative impact on the wider landscape. This policy sets out expected building heights and densities across the area and how the scale and massing (shape) of buildings should consider its impact on the skyline.

How your comments and options have been taken into account 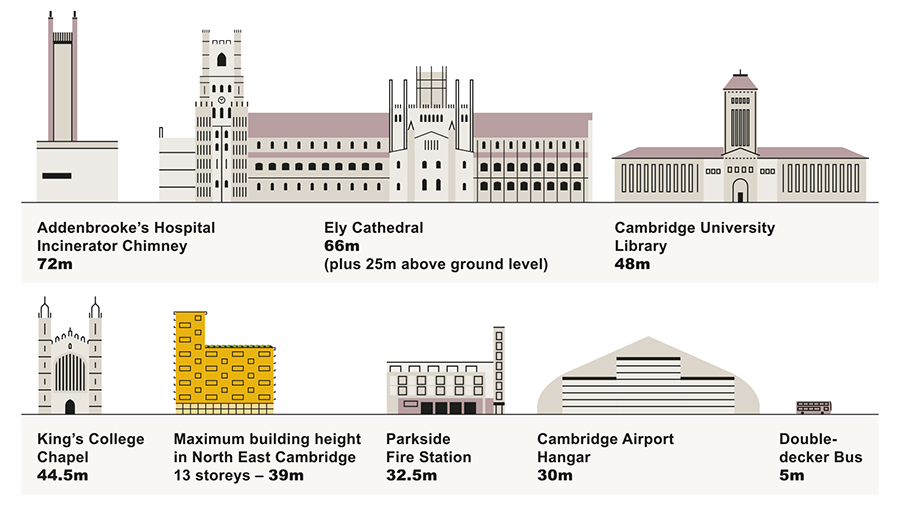 Development densities and building heights should not exceed those identified on Figure 21 and Figure 23. Densities and intensification of appropriate uses will increase around highly accessible parts of the Area Action Plan area taking into account wider development sensitives, and activity clusters such as the District Centre and Cambridge North Station.

The overall approach to building densities, heights, scale and massing for all development proposals at North East Cambridge will be expected to create a well-articulated and varied skyline throughout the area. Localised increases in height should be located to help define key centres of activity within the area and help with wayfinding.

Through appropriate landscape and visual impact assessment, heritage impact assessment and massing studies, proposals will be required to carefully assess and consider their impact on the historic and wider skyline and their relationships with the surrounding context, the setting of Cambridge and Fen Edge approaches, including their relationship to the Fen Ditton Conservation Area and other heritage assets. Proposals will be required to demonstrate how they will: 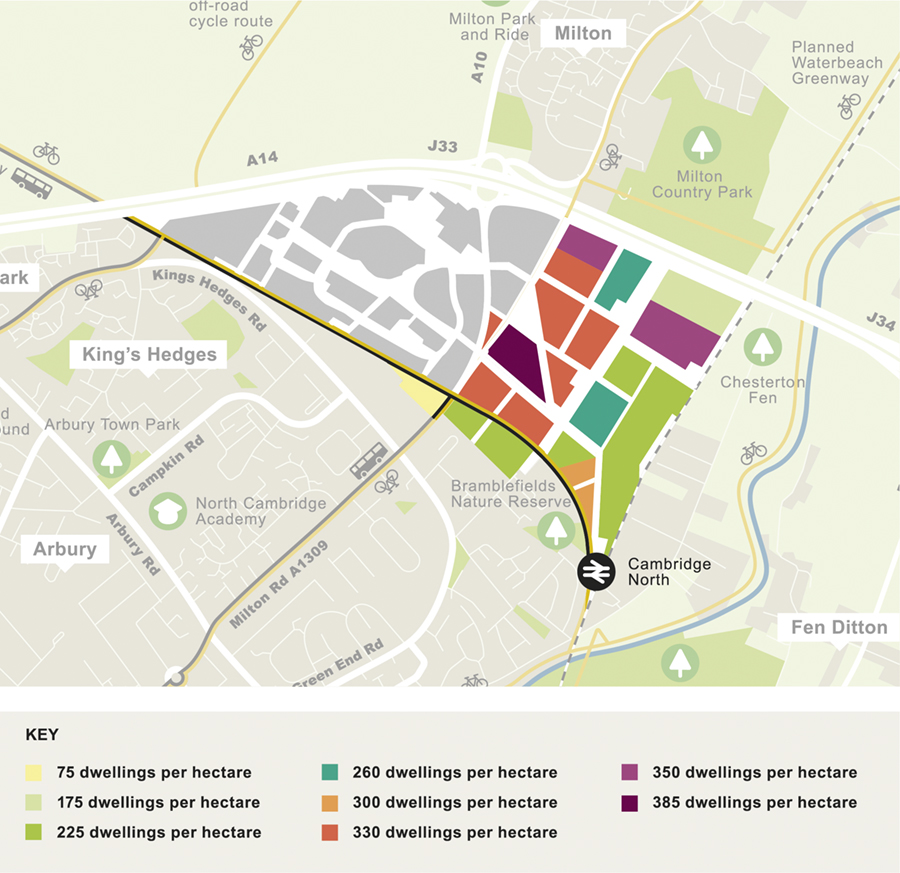 North East Cambridge will be of a size to create a self-sustaining place that provides homes, employment, leisure and other activities. To achieve such a place, the density of the area should support the range of activities and uses needed, along with making best and most efficient use of the land available, and the site's accessibility to Cambridge North Station and the associated transport interchange. Building heights and the density of development are closely related and in considering building heights, densities, scale and massing, a balance needs to be struck between safeguarding the setting of Cambridge, its key approach and historic core and providing sufficient development potential to create a strong and vibrant district.

The density of development will play a significant role in determining the kind of place created. It helps to define the character of development through the urban form, building types utilised and the quality of open spaces and streets that form the structure of urban places.

National policy requires planning authorities to make the best and efficient use of such available land and to link the density of development to accessibility by public transport infrastructure. The MHCLG National Design Guide (2019) paragraph 63 advocates compact forms of development as a method of bringing people together and supports 'local public transport, facilities and local services' to 'reduce dependency upon the private car'. Such 'transport orientated development' is the model employed in major urban centres and recognises the benefits of low private car dependency when compact, walkable places are created that maximise opportunities to provide shops and services close to, and embedded into, mixed use districts that also provide homes and jobs. Density is also intrinsically linked to the ability to sustain services and facilities and provide what people need in their day to day lives.

The Area Action Plan will facilitate the delivery of a compact, higher density new city district that maximises walking and cycling connectivity and will deliver a radically different form of development which uses the benefits of density and mixed use high quality context driven design that responds to the established character of Cambridge and the surrounding established places.

In line with National Planning Policy Framework Paragraph 137, that advocates the uplifting of density 'in town centres and other locations well served by public transport', development at North East Cambridge will be expected to make efficient and effective use of brownfield land available to achieve a critical mass of population required to create a self-supporting new city district that internalises trips and takes advantage of existing and planned public transport that provides good accessibility on foot and by bicycle.

A range of development typologies and densities have been considered within the Typology and Development Capacity Study that have informed the understanding of site capacity and how different land uses can be compatible and land efficient. North East Cambridge will deliver a significant uplift in existing commercial floorspace within the Area Action Plan area along with greater housing densities established elsewhere in Greater Cambridge. Buildings will need to be innovative to provide a range of uses to deliver an appropriately dense predominantly mid-rise, attractive street based new city district.

Building heights in Cambridge have long been a topic that has created heated discussion over the decades with people both for and against taller buildings. Cambridge has taken a cautious approach to managing tall buildings in the city with Local Plan Policy 60 Tall Buildings and the Skyline and supporting Appendix F advocating a case by case assessment based on a series of set criteria. Such an approach has recognised that even modest increases in height in certain areas of the city have potential to impact on surrounding established neighbourhoods and views from vantage points around and within the city. The prevailing scale of development in the city is currently between 2 and 5 storeys with other taller structures in prominent locations.

In 2009, Cambridge City Council organised a debate on the topic 'Is tall beautiful?'. This conversation revealed that there were concerns around planning for taller buildings and if tall buildings were going to be allowed in Cambridge, there was little support for taller buildings within the City's historic core. There was general agreement that any new taller buildings must be sympathetic to their context and position, that they should have a 'sense of place' and be of high quality both in respect of design and materials. It was considered that tall buildings must also be sustainable, environmentally friendly and connected to established infrastructure, particularly public transport. Finally, it was felt that a more proactive "strategy" was needed in order to avoid the potential for a piecemeal approach to the location of tall buildings across the City.

The North East Cambridge area lies approximately 2.5 miles (4kms) north east of the historic core of Cambridge and so the impact on the Historic Core needs to be considered in terms of the potential to impact on the setting of the City from approach routes, and from the various vantage points that allow the historic core in relation to the outlying areas to be understood.

The size of the North East Cambridge area means that a managed approach to scale, massing and the location of tall buildings is needed to help safeguard the setting of the City and to set out a clear strategy within the development area to tie in with a placemaking led approach that requires high quality streets and spaces with great architecture. Whilst Policy 60 and appendix F of the Cambridge Local Plan (2018) will be used for the detailed assessment of proposals for tall buildings coming forward at North East Cambridge, this policy, supporting diagrams and Spatial Framework will be used to manage and plan for where taller buildings can be suitably located.

Overall building heights have initially been tested through a Landscape Character and Visual Impact Appraisal. The Councils are undertaking further work in liaison with Historic England to consider the impact of taller buildings on heritage assets, the setting of the city and local townscape through a Heritage Impact and Townscape Assessment. These studies will inform a Townscape Strategy which will draw together the recommendations and conclusions from both reports to help define a tall building approach at North East Cambridge that maximises development capacity but does not harm the setting of Cambridge, its Historic core, the wider Fen landscape or other nearby heritage assets.

Assessments so far have concluded that there is capacity to accommodate some taller buildings in the District Centre without causing a detrimental impact on the wider Fen landscape around North East Cambridge. Development at North East Cambridge could be up to an equivalent of 13 residential storeys or 39m inclusive of roof top plant (residential floor to floor height of 3m) within the District Centre and this represents a significant increase from the predominant building heights in the City. However, buildings and groups of buildings will need to create a varied and well-articulated skyline, where taller buildings read as incidents and where each considers its impact on the immediate and wider context.

Elsewhere across North East Cambridge there may be local opportunities to increase heights of buildings above the prevailing scale of other new buildings where they have a role in wayfinding, defining key open spaces or maximising proximity and accessibility to sustainable transport infrastructure. Proposals for taller buildings will need to demonstrate that they do not harm the amenity of their surroundings, the setting of the City and the wider landscape character.

Figure 21 is based on an assumed floor to floor height for residential use of 3m and overall indicated heights are inclusive of plant and lift overruns. It is expected that ground floors will be 4m floor to floor to accommodate non-residential uses. While the plan shows typical height ranges, lower forms will also be acceptable and it is expected that a design led approach will be taken to achieve a human scale, plot-based approach to development.

NH/8: Mitigating the Impact of Development in and adjoining the Green Belt