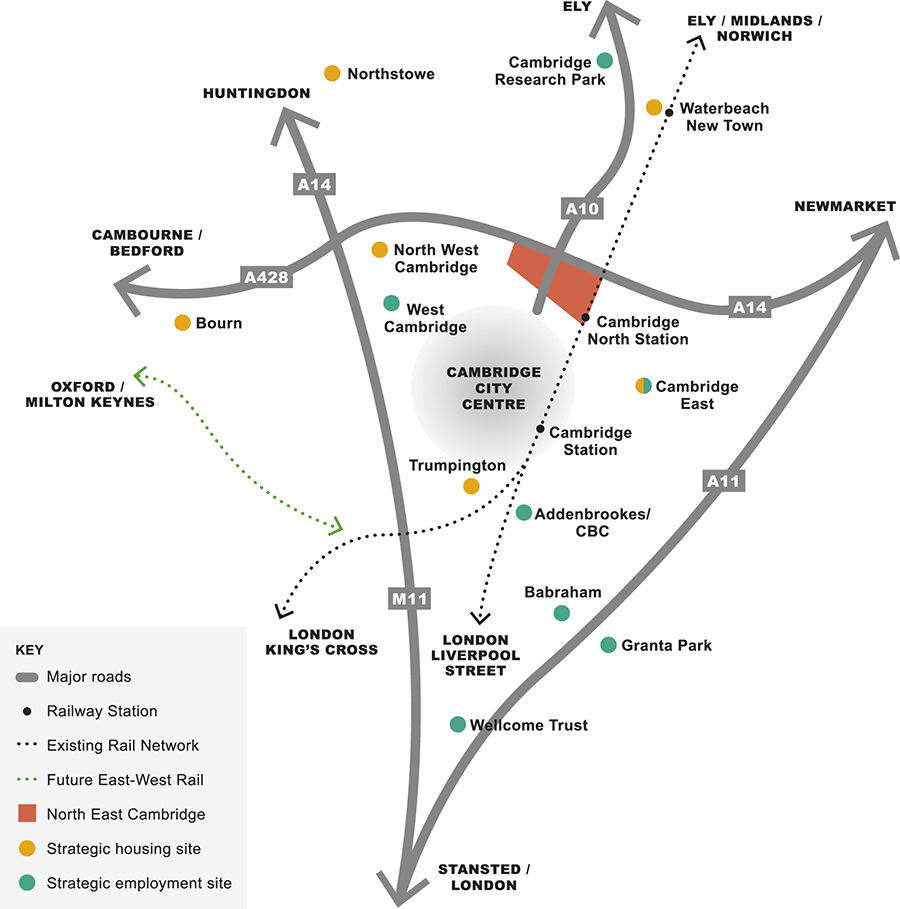 Cambridge has an international reputation based on its world-class university and economic success, which belies its small size. Surrounding the city lies the district of South Cambridgeshire which, although largely rural, has become home to several research and development clusters.

Cambridge is strategically located within a number of growth and transport corridors, including the London-Stansted-Cambridge UK Innovation Corridor, the Oxford-Cambridge Arc and the Cambridge-Norwich Tech Corridor. The Oxford-Cambridge Arc has been identified by the National Infrastructure Commission as being a national asset and a focus for creating new homes, better connectivity and economic opportunities. To support this ambition, central government has committed to delivering the East-West Rail project which, on completion, will connect North East Cambridge, at Cambridge North Station, with Milton Keynes and Oxford, in in the early 2030s, via a new railway station at Cambridge South.

The North East Cambridge Area Action Plan will play an important role in bringing forward thousands of new homes and jobs along these nationally important corridors, as well as making a significant contribution towards meeting the housing and employment needs of Greater Cambridge. 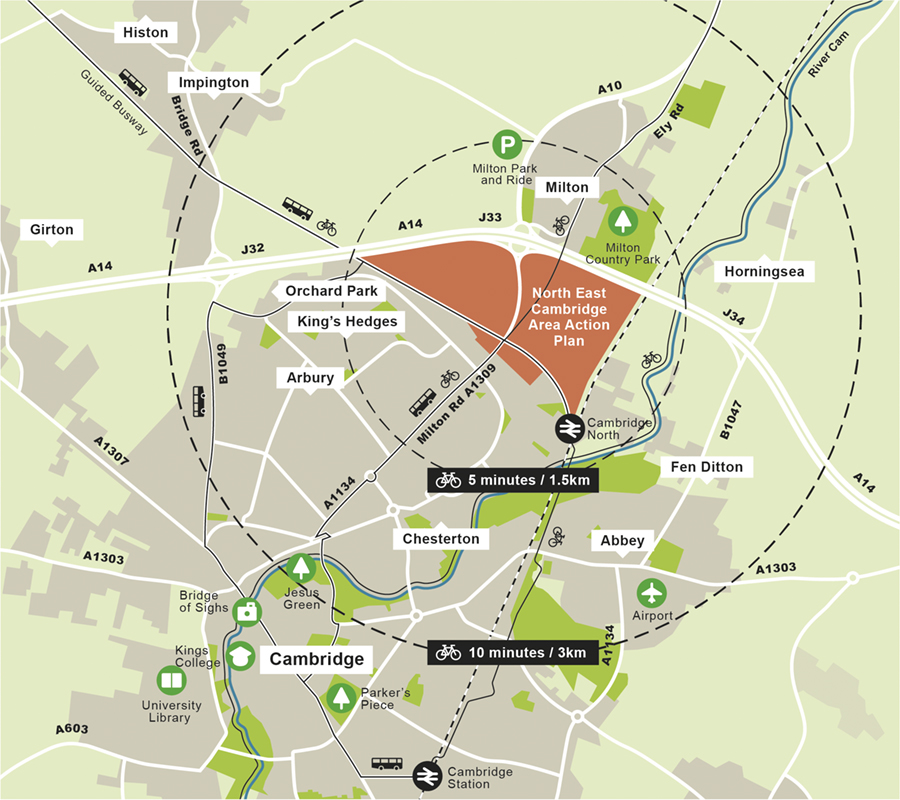 The area designated for the North East Cambridge Area Action Plan is situated between the A14 to the north and west, the Cambridge-King's Lynn and Peterborough/Birmingham railway line to the east, and residential areas to the south. Milton Road – a key arterial vehicle route – divides the area into eastern and western parts. Milton Road leads to the city centre to the south, and continues north as the A10 towards Waterbeach and Ely; North East Cambridge therefore lies at a key gateway location into the city. The Cambridgeshire Guided Busway, which runs from Cambridge North Station towards St Ives, partly forms the southern boundary of the Area Action Plan.

These major transport infrastructure routes create a number of environmental constraints to development, including noise and local air quality, which can have an adverse impact on the health and quality of life of existing and future residents and workers.

Across the Area Action Plan area there has been a long history of industrial type uses on the site, including industrial manufacturing and processes and the Waste Water Treatment Plant. As a result, land contamination is another development constraint that will need to be comprehensively addressed in order for the site to be further developed.

To the north of the Area Action Plan site lies the village of Milton, Milton Country Park and the countryside beyond, which forms part of the wider Fen landscape. While North East Cambridge currently feels disconnected from this wider landscape, important biodiversity and wildlife corridors from the city to the Fens, such as the First Public Drain, exist in the site area. 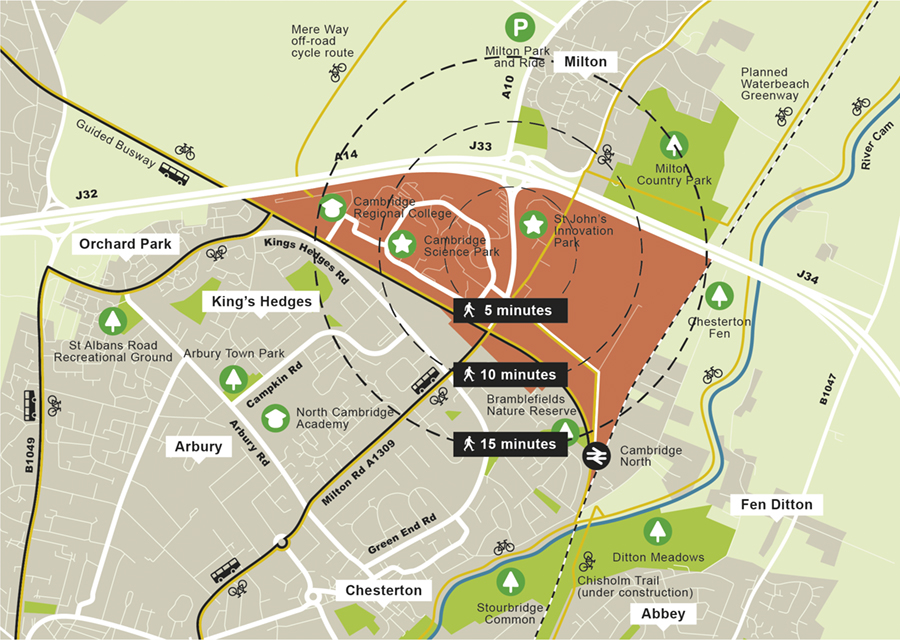 The site is already well-connected by public transport and strategic cycling routes. These include:

Through the A10 and North East Cambridge Transport Studies, it is clear that congestion is a major challenge for Cambridge's strategic road corridors. In particular for this site, the Milton Interchange (A14 and A10 roundabout) and Milton Road leading into the city are at maximum capacity, resulting in frequent congestion and delays to journeys. Whilst the existing A14 improvement works may help to alleviate some congestion on the A14 and A10, long term improvements can only be achieved through significant investment in sustainable alternatives. 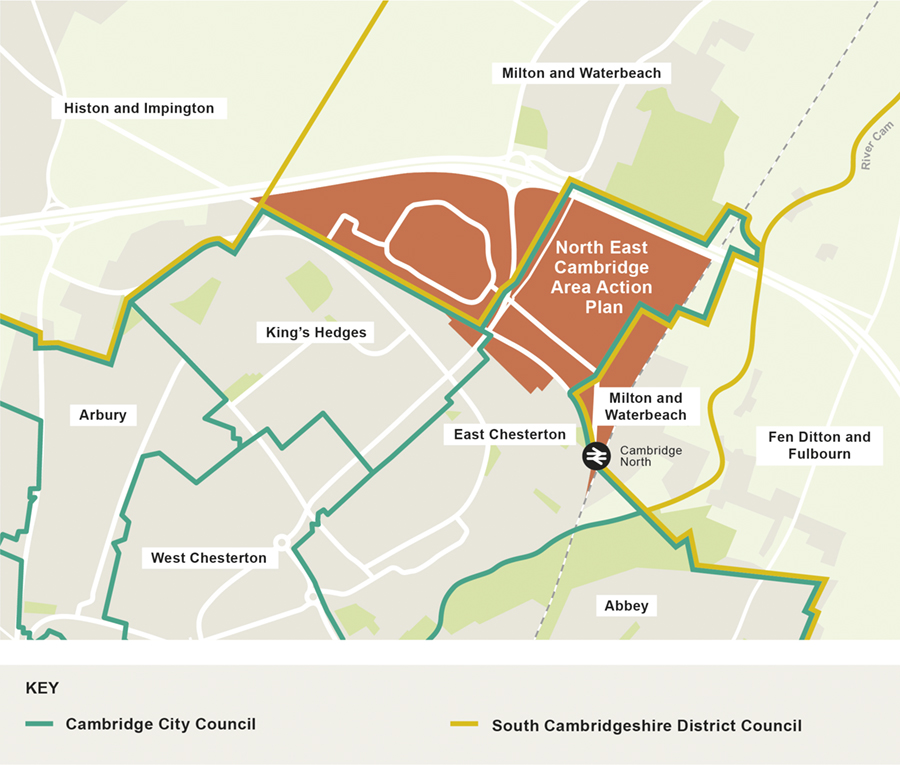 North East Cambridge is a place of contrasts, within the Area Action Plan area and in the surrounding communities. Existing employment parks within the area form an important part of the Cambridge Cluster, the largest technology cluster in Europe, but the area also contains light and heavy industrial uses which are an important part of the city's local economy. The residential neighbourhoods surrounding North East Cambridge to the south and east include East Chesterton as well as King's Hedges, Arbury and Abbey, which are within the most deprived wards in Cambridgeshire. There is a large Traveller community to the east of the site between the railway line and the River Cam, and villages to the north and east.

In Greater Cambridge overall health and life expectancy are well above the national average, but within this there are marked geographical and socio-environmental health inequalities. There is a 10 year difference in life expectancy between the most and least deprived wards in the area. Index of Multiple Deprivation scores for North East Cambridge show that the area experiences lower levels of skills, income and greater health inequalities than the rest of Greater Cambridge. This is also the case with specific vulnerable population groups such as Travellers, older people, people with disabilities, people who are on low incomes or unemployed, and homeless people. 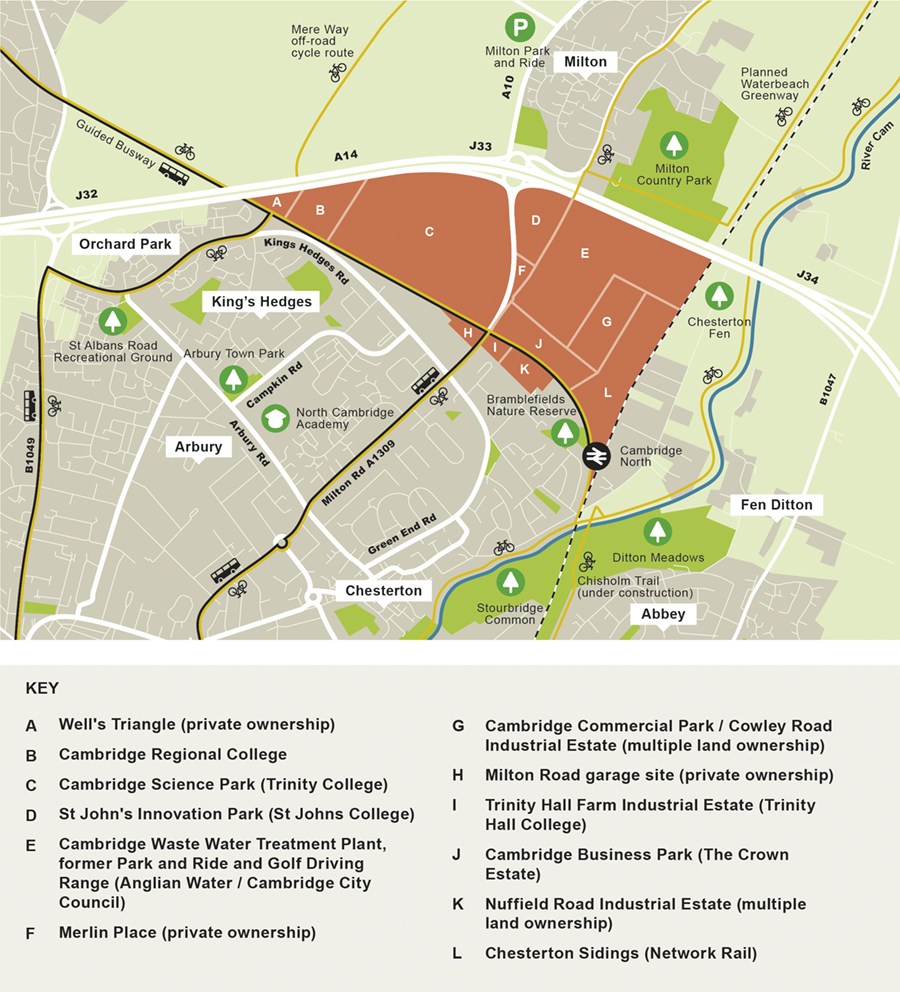 Land ownership within the Area Action Plan is fragmented but there are a handful of larger sites which are in single ownership. This includes Cambridge Science Park (Trinity College), St John's Innovation Park (St John's College), Cambridge Business Park (The Crown Estate), Trinity Hall Farm Industrial Estate (Trinity Hall Farm/Dencora) and Cambridge Regional College which is owned by the college itself.

The Waste Water Treatment Plant is owned by Anglian Water and, together with the Cowley Road golf driving range and former Park and Ride site (owned by Cambridge City Council), forms the site which is subject to the Housing Infrastructure Fund.

The land around Cambridge North Station and the former railway sidings are owned by Network Rail and a development consortium has been formed to bring forward this land for development. This is formed of Network Rail as landowner, as well as Brookgate and DB Schenker.

The remaining sites within the plan area, including Nuffield Road and Cowley Road Industrial Estates, are made up of a number of different landowners including Cambridge City Council. 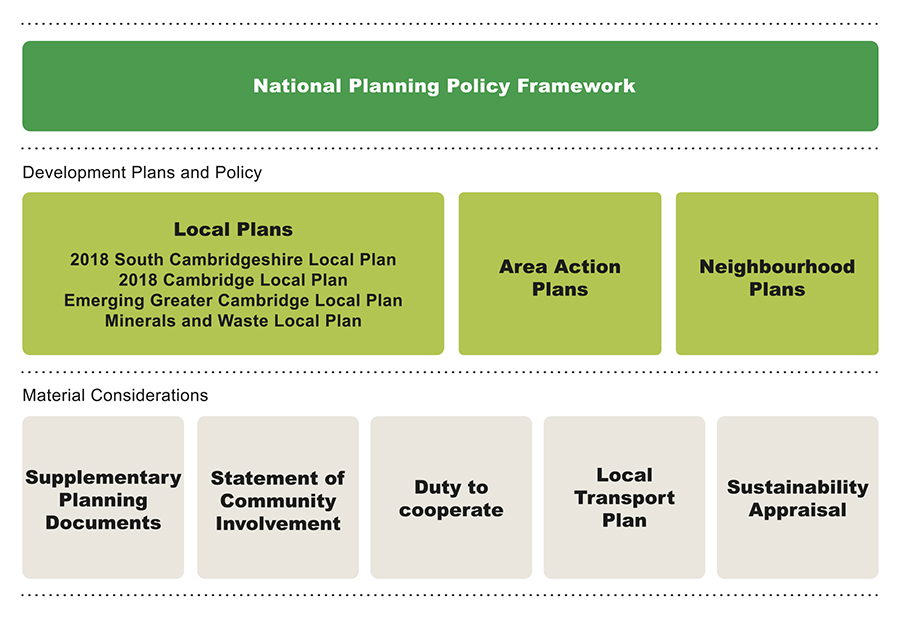 These adopted 2018 Local Plans will be superseded in due course by the emerging Greater Cambridge Local Plan. In early 2020 the Councils undertook an Issues and Options consultation to explore the key themes that will influence how homes, jobs and infrastructure will be planned in the emerging Greater Cambridge Local Plan. The consultation was based around four big themes; Climate Change, Biodiversity and Green Spaces, Wellbeing and Social Inclusion, and Great Places. The strategic objectives of this Area Action Plan align closely with these themes, and its specific policies set out how they can be delivered at North East Cambridge.

The policies in the adopted 2018 Local Plans allocate the site for a high-quality mixed-use development with a range of supporting uses, where matters related to site capacity and the viability, phasing and timescales of development will be addressed in this Area Action Plan. It is anticipated that development at North East Cambridge will make a significant contribution to the housing and employment needs of Greater Cambridge.

The eastern part of the Area Action Plan site is the Cambridge Waste Water Treatment Plant, which is an essential piece of infrastructure that serves Cambridge and surrounding areas. The adopted 2018 Local Plans noted that a new treatment works facility either elsewhere or on the current site would be assessed as part of the feasibility investigations in drawing up the Area Action Plan. Feasibility studies are now complete and relocation off-site is the option moving forward.

In March 2019, the government announced that the Cambridgeshire and Peterborough Combined Authority and Cambridge City Council had been successful in securing £227 million from the Housing Infrastructure Fund (HIF) to relocate the Waste Water Treatment Plant off-site, to enable the Area Action Plan area to be unlocked for comprehensive development. The relocation project will be led by Anglian Water who are consulting with the local community before submitting a Development Consent Order (DCO) application to the Planning Inspectorate.

Cambridgeshire County Council is the Minerals and Waste planning authority for the area. The county-wide planning policies that form the context for the Area Action Plan are set out in the adopted Cambridgeshire and Peterborough Minerals and Waste Core Strategy (July 2011) and Site Specific Proposals Plan (February 2012). These plans are currently in the process of being reviewed and the preparation of a single joint Minerals and Waste Local Plan is being produced. The preparation of this Area Action Plan has been informed by both the adopted and emerging plans.

Parts of North East Cambridge and its immediate surroundings are the subject of several adopted County minerals, waste management and transport planning policies. The waste management designations and safeguarding areas relate to the protection of existing waste facilities (Anglian Water's Waste Water Treatment Plant, Veolia's Waste Transfer site and the Milton Landfill site). These seek to ensure that the future operation of these essential facilities is not prejudiced by future development, which therefore must be compatible with the existing waste management uses. They also relate to finding replacement waste facilities in the area. The transport designations in the County's Minerals and Waste Plan focus on the retention and safeguarding of the strategic railheads and associated aggregates operations on the Chesterton Rail Sidings.

2.1.7 How we are developing the Area Action Plan 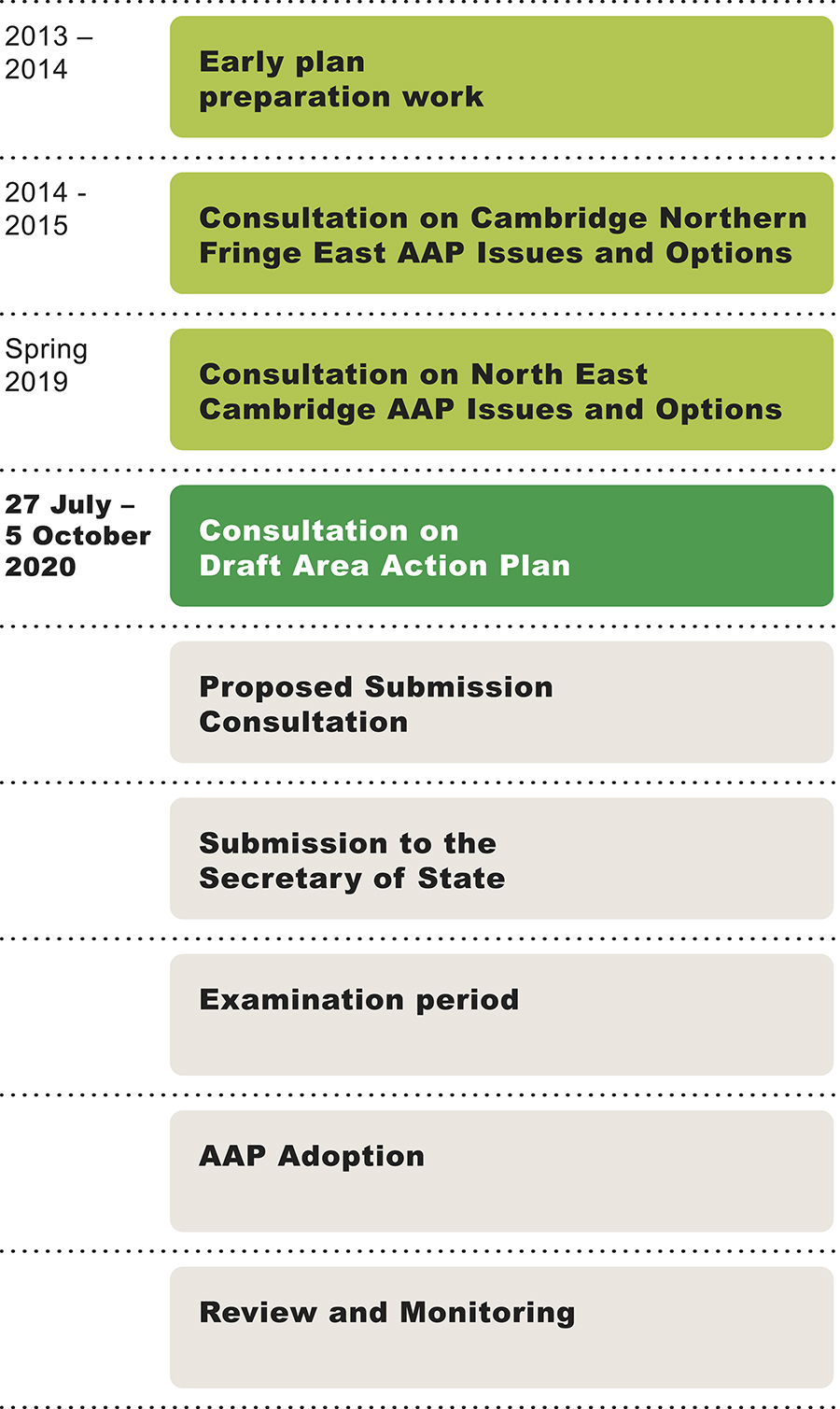 Figure 8: Timeline for the development of the Area Action Plan

The draft Area Action Plan has been informed by two rounds of public consultation:

The 2019 Issues and Options consultation presented a new vision for North East Cambridge and identified a number of planning issues and options for the Councils to consider and explore. Some of the key topics included:

In total, over 1,200 comments were made at the 2019 Issues and Options consultation. We have summarised the relevant comments at the start of each policy within the draft Area Action Plan, and stated how the comments have been taken into account when preparing the policy. Full details of the consultation activities and findings are set out within the Consultation Statement.

The Councils have also established several forums which have informed both the preparation of the Area Action Plan as well as our approach to community engagement during the consultation period on this draft plan. There are three North East Cambridge forums:

These forums ensure that the diversity of local concerns, aspirations, challenges and ideas are constructively used to help prepare the Area Action Plan and our approach to consultation and wider engagement.

The Councils are also engaging with the Duty to Cooperate with affected parties and statutory bodies as defined by planning regulations. This is an ongoing process, with the intention that such engagement and cooperation will involve consideration of both the Area Action Plan and the Greater Cambridge Local Plan and will continue through the plan making process.

Status of this document: Regulation 18 consultation

Following this consultation, we will refine the draft policies in response to the comments received and the emerging evidence studies that the Councils are undertaking. The next version of the Area Action Plan will then be published for a further round of public consultation before the document is submitted to the Planning Inspectorate for an independent public examination.