There are a number of existing known factors that are likely to be important as we consider future development options.

A key site that will feed into the new development strategy is North East Cambridge. This brownfield site in the built-up area of Cambridge includes the area around Cambridge North Station, and the Anglian Water site where funding has been secured through the Housing Infrastructure Fund to support redevelopment. A North East Cambridge Area Action Plan is in preparation and will show how significant levels of jobs and homes can be created here. While this site is allocated in the adopted 2018 Local Plans, neither plan relied on development here to make up its growth targets. This means that all development here will count towards the additional targets for the next Local Plan.

Also significant is Cambridge Airport. Previous plans had allocated the Airport and other land to the north and south for a major new urban quarter of 10-12,000 new homes and a strategic scale of jobs. When we were preparing the adopted 2018 Local Plans, Marshall advised that it had not secured an alternative site and the land would not be available until at least 2031. The adopted 2018 Local Plans therefore safeguard the land for development in the event that it becomes available, recognising that it is in a very sustainable location on the edge of Cambridge and is no longer in the Green Belt. Development on safeguarded land can only occur once the site becomes available and following a review of the adopted plans. In May 2019, Marshall announced that it intends to relocate and has identified three possible options, one of which is in Greater Cambridge at the IWM (Imperial War Museum) site at Duxford. Confirmation whether the safeguarded land at Cambridge Airport can be developed within the next 20 years will be important as part of considering whether to allocate it in the next Local Plan.

The Combined Authority's Cambridgeshire Autonomous Metro (CAM) scheme could enable efficient and low impact travel into and around Cambridge, easing congestion issues in the area and also enabling further growth close to stations. This project is at a relatively early stage of its development and will be progressing as the next Local Plan is prepared. How it should be taken into account in the Plan will depend on the progress it makes while we are preparing the Plan.

The East West Rail project between Oxford and Cambridge also has implications for significant growth, particularly in terms of the possible location of a new station in South Cambridgeshire. As with the Cambridgeshire Autonomous Metro (CAM) scheme there is currently uncertainty as to the timing of this project, and progress during the period of Plan preparation will affect how it should be taken into account.

National planning policy requires the Local Plan to promote a good mix of sizes of sites for housing. It requires us to identify small sites, no larger than one hectare, to accommodate at least 10% of the housing requirement.

However, the Green Belt also restricts growth on the edge of Cambridge, a location that has sustainability advantages in terms of access to jobs and services and reducing trips by the private car that could help mitigate our climate impacts. In that context, national planning policy requires that local plans consider the impact on sustainable development of channelling growth outside the Green Belt. At the same time, recent changes also mean that alternatives have to be fully explored before land can be removed from the Green Belt. This will be an important issue for the plan. 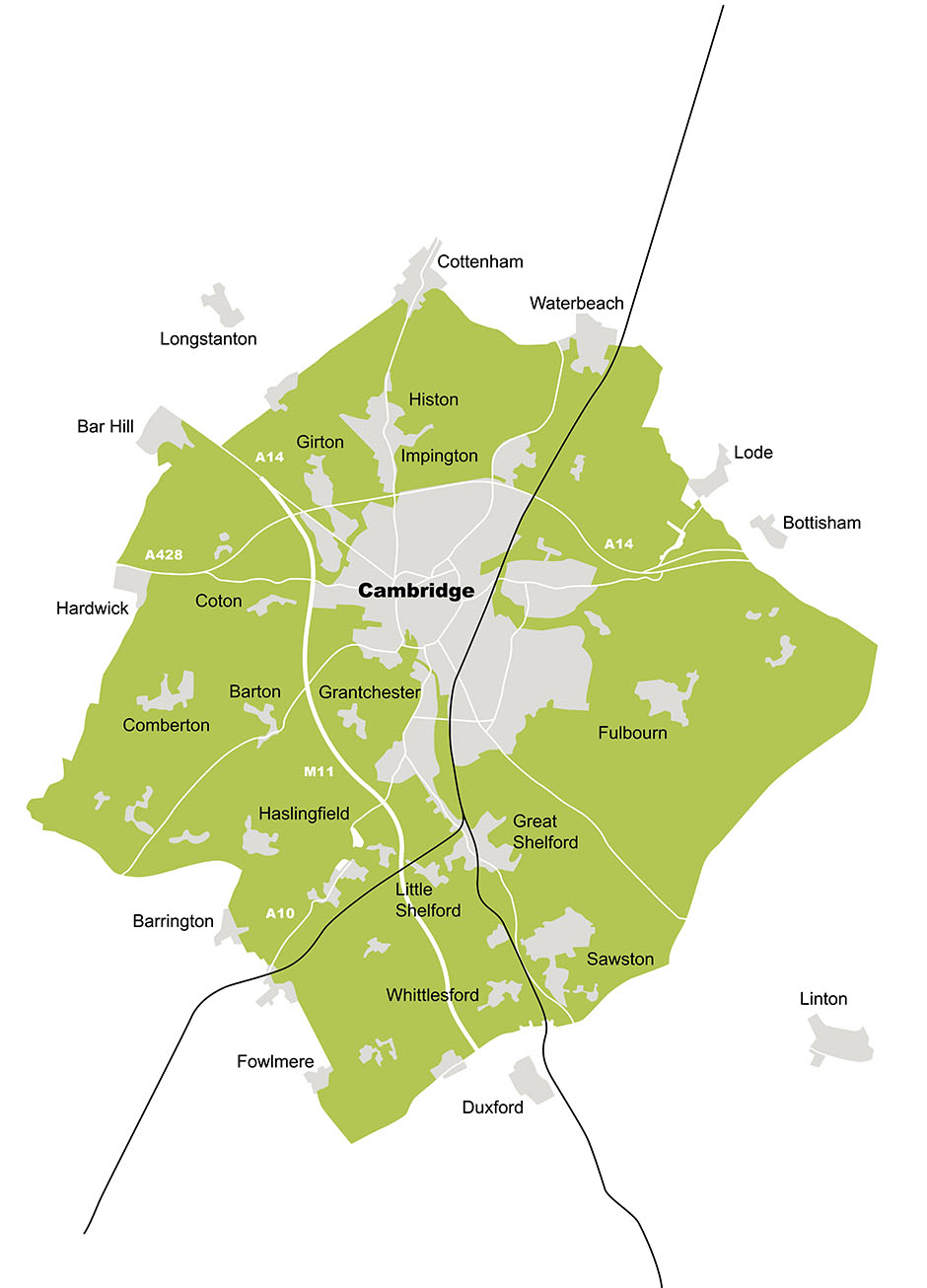 (159) 39. Should we look to remove land from the Green Belt if evidence shows it provides a more sustainable development option by reducing travel distances, helping us reduce our climate impacts?

Our villages are wonderful places to live, but many villages have an ageing population and also struggle to support the range of services and facilities that residents would wish to see.

Early Local Plan community workshops in summer and autumn 2019 suggested that an important issue is to decide how flexible the plan should be in supporting growth of jobs, homes and services in villages, as part of supporting their economic and social sustainability.

The adopted 2018 South Cambridgeshire Local Plan sets a development framework (boundary) for each village, outside which development is heavily restricted – this is intended to protect the countryside from gradual encroachment, and guard against incremental growth in less sustainable locations away from services, facilities and public transport. The plan does allow affordable homes to be built outside village frameworks, where there is evidence of local need for affordable housing, as an exception to normal policy (so-called 'rural exception sites').

The adopted 2018 Local Plan also categorises villages into four different types according to how 'sustainable' they are in terms of shops, public transport and local services. This is intended to restrict growth in the smallest villages, where transport alternatives to the car are often limited, and where there is a need to travel for basic services like schools. The category limits how many homes can be built on a single development within the village boundary, for example on a brownfield site that becomes available.

In 'Rural Centres' like Sawston there is no limit on how many homes can be built on a single site within the village framework, whereas in an 'Infill Only' village like Knapwell, the adopted 2018 Local Plan allows only two new houses per site, if it has an existing frontage (or slightly more for a brownfield site). The full list can be found in the adopted 2018 South Cambridgeshire Local Plan (in Policies S/8 to S/11[57]).

The next Local Plan could re-examine the approach to village growth and there are various approaches that could be taken. This could include looking again at the village categories, being more flexible to the scale of development within the village framework, and/or allowing a more flexible approach to development on the edge of villages. It could retain a more restrictive approach to the more remote villages, in order to focus growth in the most accessible locations. Local communities may have a particular view on the needs of their village.

(169) 40. How flexible should the Local Plan be towards development of both jobs and homes on the edge of villages?

(108) 41. Do you think the Local Plan should be more flexible about the size of developments allowed within village boundaries (frameworks), allowing more homes on sites that become available?