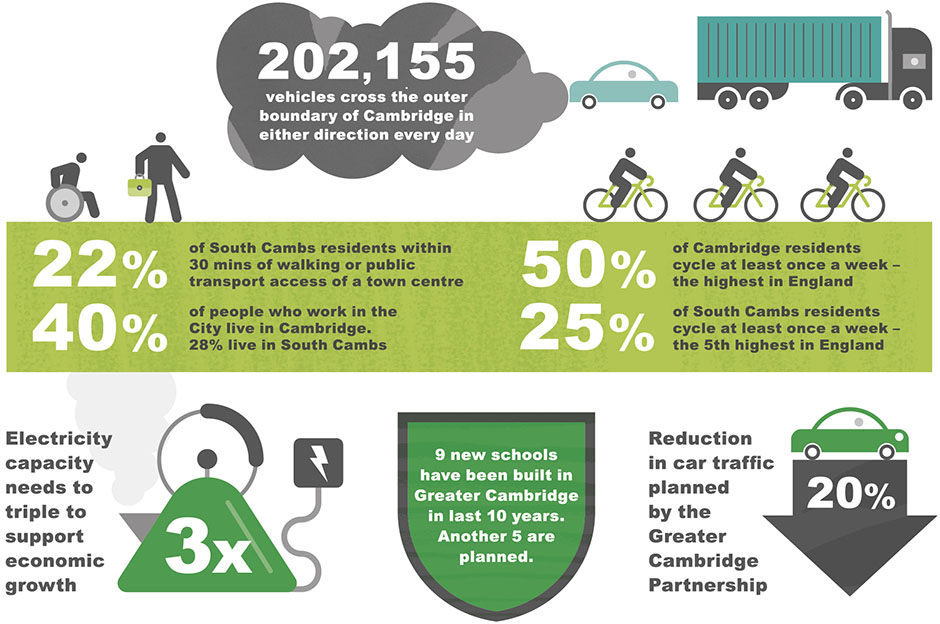 New growth needs new infrastructure, and the next Local Plan needs to show how planned housing and jobs will be accompanied by the services and facilities to support them sustainably.

Growth creates challenges and opportunities for transport. We need to reduce the number of cars on the road, and support more sustainable transport, if we are to achieve the net zero carbon challenge. There are already significant new transport improvements being brought forward by the Cambridgeshire and Peterborough Combined Authority and the Greater Cambridge Partnership, alongside nationally-led schemes like East West Rail. We will need to consider the opportunities these provide as we are preparing the next Local Plan.

Infrastructure to support new jobs and homes includes schools, health facilities, utilities networks like water and power, and telecommunications such as broadband. While the Councils are not directly responsible for these, for development to be sustainable we need to help to ensure they are available to meet the needs that result. Not providing enough infrastructure could result in increased congestion, add pressure to schools and health facilities, or even prevent new jobs and homes being created.

Infrastructure timing is important. Our early workshops have told us that having infrastructure available when it is needed to serve new developments is a key community concern. We also need to consider opportunities for growth to improve existing areas, and provide access to new services and facilities for existing residents.

(122) 36. How should the Local Plan ensure the right infrastructure is provided in line with development?

National planning policy requires that Local Plans make sufficient provision for infrastructure within developments, particularly on large sites, or funding for provision off-site, including contributions from developers. This includes the infrastructure required for transport, and measures to support sustainable forms of travel like cycling, walking and public transport, as well as other services such as schools, healthcare facilities and utilities essential to support growth, including electricity, water supply and sewerage.

Critically, national policy requires Local Plans to show that they are deliverable, which for infrastructure means identifying what infrastructure is needed, when it is needed by, how much it will cost, and how that cost will be met.

Transport was a big influence on the adopted 2018 Local Plans. The shared development strategy focused growth in areas where transport by sustainable modes such as walking, cycling and public transport was available or could be achieved.

The Greater Cambridge Partnership is developing a number of transport schemes designed to improve sustainable travel in the area, though supporting walking, cycling and public transport. This includes links between Cambridge and the new settlements at Cambourne, Bourn Airfield and north of Waterbeach. Funding of up to £500m has been secured through the 2014 City Deal, which will be combined with other sources of funding, including from developers.

As the Local Transport Authority, the Cambridgeshire and Peterborough Combined Authority has just finished consulting on a draft Local Transport Plan[52]. The plan has objectives to achieve a 'world-class transport network' which meets the needs of residents, businesses, and visitors and deliver sustainable growth.

The Combined Authority is developing plans for a Cambridgeshire Autonomous Metro (CAM). This would build on the work of the Greater Cambridge Partnership by linking destinations in Cambridge, such as the Cambridge Biomedical Campus, City Centre and North East Cambridge, to each other and key corridors out from the city, including to St Ives, Cambourne, Waterbeach, Trumpington, Haverhill and Mildenhall.

Major improvements are also planned to the rail network, including a new station in the south of Cambridge near to Addenbrookes. Government-led plans for a new rail line linking Oxford to Cambridge[53] include a station at either Bassingbourn or Cambourne. The choice of route, expected soon, could significantly influence future growth patterns in Greater Cambridge, while the rail line itself will have major environmental implications for South Cambridgeshire's communities. In particular, the Councils are lobbying the East West Rail Company for the project to achieve biodiversity and wider environmental net gain. The Councils are also involved in a project to improve rail services between Cambridge and the east.

The Greater Cambridge Partnership and the Cambridgeshire and Peterborough Combined Authority are investing in a 'Smart Cambridge'[54] programme. This is exploring how data, emerging technology and digital connectivity can be used to transform the way people live, work and travel in the Greater Cambridge area and beyond.

The Connecting Cambridgeshire programme is improving the county's digital infrastructure: superfast broadband rollout has already reached over 97% of homes and businesses, and is aiming for over 99% coverage countywide in the next two years. Programmes are now being extended to include full fibre networks and improve mobile coverage. Our Local Plan will need to consider how new development can benefit from this infrastructure. 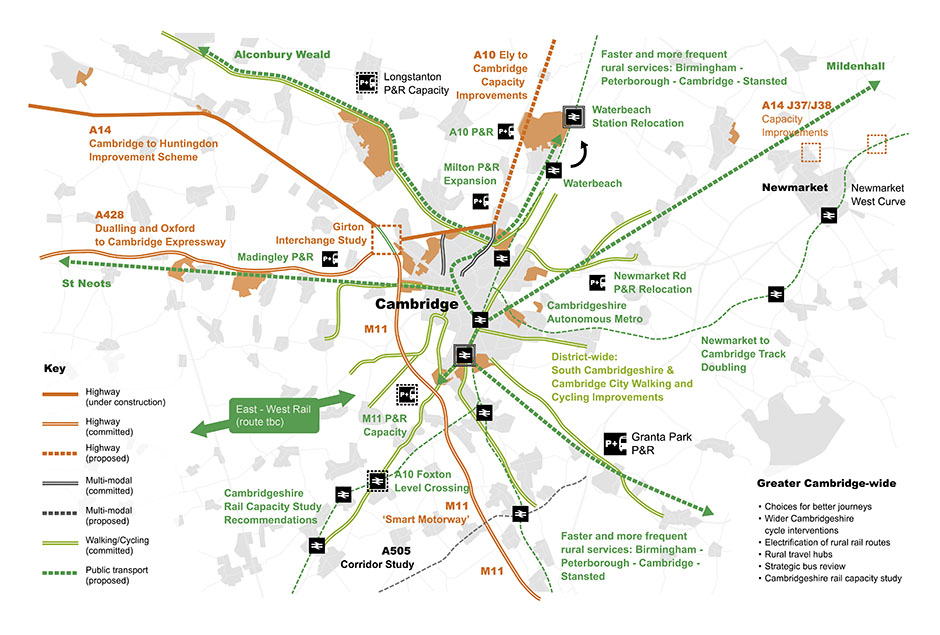 The Local Plan will need to consider how new development encourages a shift towards decreasing car use and increased use of sustainable transport. The way we move around is likely to change significantly over the plan period and our communities will need to be able to adapt to this.

(236) 37. How should we encourage a shift away from car use and towards more sustainable modes of transport such as public transport, cycling and walking?

The next Local Plan will be supported by an infrastructure plan which will need to consider issues including:

Identifying land for minerals and waste, including recycling centres, is identified in a separate Minerals & Waste Plan[55] produced by Cambridgeshire County Council. Linked to this, the Councils are partners to the RECAP Waste Management Design Guide[56] which sets out how new development should be designed to support effective waste management.

(107) 38. What do you think the priorities are for new infrastructure?